After Wellington Round the Bays I was straight back into full training mode with some solid back to back weeks of 100kms plus of running. This meant a total of 10 weeks to do some strength endurance based work as well as targeted speed work to be marathon ready. The highlight of March was a solid team effort at the Tarawera Ultramarathon in Rotorua where my team placed 12th in the relay of 70km. My buddies Nick, Aaron and Daniel who are part of my club did really great in tough conditions on the day. The course was altered at the last minute due to a tropical cyclone that was coming towards the forest where the original trail went through. In the end everyone who participated had a great time. This is certainly a great event to be part of in the New Zealand trail running calendar. I got to meet Vera (aka Supergeneric girl!) BONUS! 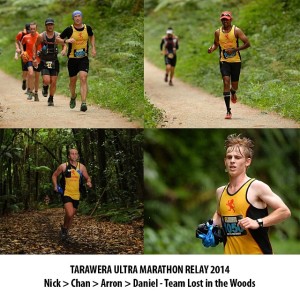 Team Lost in the Woods charging through the trails of Tarawera.

The weekend was spent running in some of the best trails in and around Rotorua. I also got to meet Sage Canaday (DOUBLE BONUS) who is now the two time winner of the Tarawera Ultra marathon. 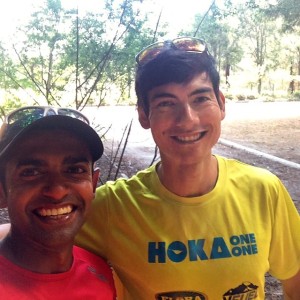 Meeting Sage Canaday in the Redwoods 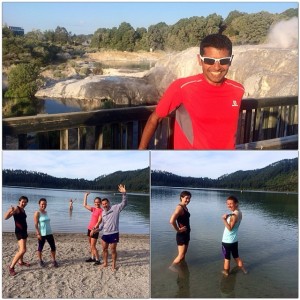 My friends who did the Ultra Distance kicked ass with some of them being in the top 10 of both the long and short courses.

After Tarawera it was pretty much back to a lot of training involving some solid mileage and tempo and interval work. I also included a 6 week block of strength conditioning twice a week.

On 5th of April (incidentally also my 40th birthday) I ran a 10km club race for our running club Wellington Scottish Athletics. My aim was to run a steady conservative effort and I was not aiming to go all out. Somehow this day I felt really good and strong and my conservative effort actually felt pretty steady and easy which resulted in me shaving off a full 2 mins off my previous 10km race time and running a 40:22 – 10km race. This was a great indication that my marathon training was paying off. Not only could I maintain avg 4min per/km pace I felt really good afterwards and didn’t need a long time for recovery. 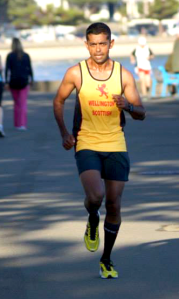 Overall I feel I have done a pretty good chunk of training and my average mileage has significantly increased from last year. If any of you are on Strava check out my profile and connect.

Last week was a long weekend (Easter and Anzac) which provided a great opportunity to travel and explore some great trails. Although I should have actually cut back on mileage and gone into a taper I ended up running in some great trails in Tongariro National Park and Kinloch in Taupo. This included the following trails. 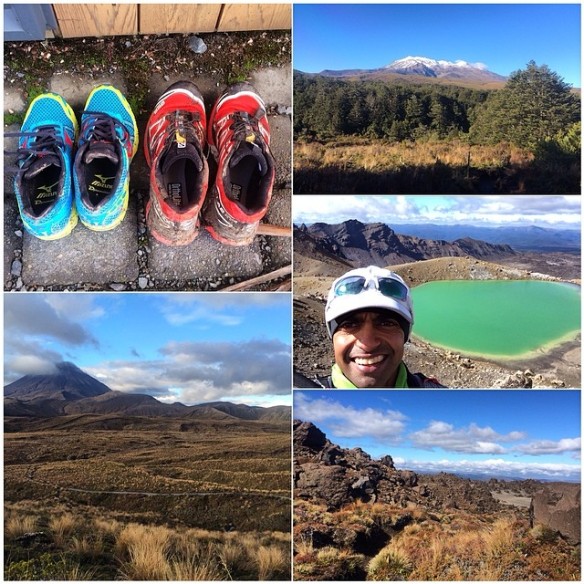 With this amount of running I am taking this week before Rotorua very easy and resting for the Rotorua Marathon. As usual watch out for the post race update next week and I am hoping that it will be a positive one – but it’s a Marathon and no matter what you have done what you feel on the day and during a marathon is what makes the difference. I am staying positive that I will be able to run a great marathon. The place is going to be buzzing with over 9000 people participating in the full and half marathon distances.

A while back I wrote that I was struggling to break the 20min mark in my 5km races. Fast track to exactly a year and I am now quite comfortably running sub 20min 5km races. My initial frustration with not being able to break that mark is now rewarded with a series of sub 20 times in a number of 5km races since October 2013 through to January 2014.

So far in 6 of my 5km races since October 2013 I have being consistent at running under sub 20minutes as follows:

With the net improvement my goal is to now be comfortable at running this pace at other distances. My next goal is to break 90mins in the half marathon distance. Key to this is being able to sustain 4:15min per KM splits for the net distance and pass the 5km mark in a comfortable time of 19:59 in a half marathon race. This will also mean that my current 10km personal best time will have an improvement. Well that’s the theory anyway.

Overall I am now doing some specific speed work sessions every week and working at my threshold pace. This has resulted in a few things:

With these gradual increases I am hoping that I can continue my training and improving my running for this year. Main goal being the Rotorua marathon in May.