No matter how good you are at something, there’s always a million people better than you
– Homer Simpson 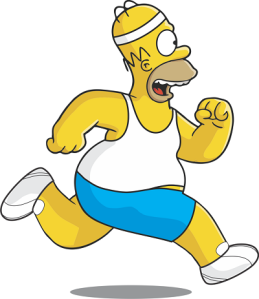 Saturday 17th August was a good day, I ran a PB in a local club 10km event. I was a whole 2 minutes faster than my previous 10k time. Then again I was pretty slow compared to all the others in my age group. Just to put this into perspective, the current world record for a 10km road race is currently 26:44 (Yes that’s 26mins). British Athlete Mo Farah (aka MObot) runs the same distance on track (10,000m) in 26:46, the track world record is held by Ethiopian runner named Kenenisa Bekele. Previous record holder for 10,000m and still number two is the great Haile Gebrselassie in 26:22. The New Zealand Record holder for 10,000m is Dick Quax in 27:41 with Jonathan Wyatt holding the 10km road title in 28:04. (Source Athletics NZ – http://www.anzrankings.org.nz/site/records_con ).

In the senior men category in which I ran there were 40 Wellington club affiliated runners (There were also other age group runners, Senior men, Masters etc which made the whole field to be about 120 runners). Evan Cooper from Wellington Harriers won the race in a time of 31:39. Glen Hughes from Wellington Scottish came second in 31:46. I was 36th in the senior field and 77th overall with my PB time of 42:00 (yes I was bang on 42:00) – my previous 10km time was around 44 or close to 45mins (which I ran in London this year) so being able getting it down to 42mins was a bonus. The race itself was run on a 2km lap course which made it somewhat easier to pace myself. I wanted to run as close to 4:00min per Km as possible. I had two club mates who was around my pace so we had a great race between the three of us and I was able to hold off both of them and take my “PB win”.

Above are my 1 Km splits, note that odd laps were slightly uphill gradient hence the time being a tad slow and the even laps of course coming down and being faster. This had a pretty tiring effect on the legs overall. I made my move at the 8km mark and ran up the hill fast and let go on the down. Net result an even average of 4:05min Per Km. This is one the great things about being part of a club, it gives you an opportunity to compete in regional events also if you become a racing member you get your own timing tag! If you want to know more about joining a club check out Wellington Scottish or come around to the Wellington Waterfront on a Tuesday at 5:30 to take part in the Waterfront 5k run and a chat.

Until next time! happy running..

As a runner you sometimes prefer the solitude of running alone with the ability of going on your own routes & running at your own pace. There are times where you want to explore a little bit more unknown territory and new routes, you aren’t really sure if that trail that you saw while driving is runnable or even where it may lead you. Is it safe? Will there be mad rabbits and or farmers chasing you if you venture out to the unknown? Exploring new routes is all part of the fun of running. When I first started out running I did what most people do – stick to known roads and areas that I’m familiar with, however after a while it becomes a bit boring, yes you can zone out and listen to music or whatever but as soon as running becomes a chore the fun of running is gone!

Some of my best experiences in running has been discovering new routes & trails that’s around in Wellington! (Literally hundreds of Kilometers) Even after running for 3 years I keep discovering new trails. The only reason that I’ve been able to find new trails/routes is because I try and run at least once a week with other runners.

We as runners are always apprehensive when someone else asks us “Hey you should come running with me!” – Our immediate reaction most of the time is – “oh no I’m going to hold you up I’ll be slow” or inside our head we go “oh god! I’ve seen your times you are freaking fast – I’ll be gasping for breath to keep up” – Believe me – I have been like this many a time when others first approached me to join their groups for runs. The reality is if another runner or group is asking you to run with them is not to poke fun at you for running slow or anything else, they are either wanting some company or want to show you some new routes. Now I absolutely love going running with others. I have made these runs to actually work to my advantage and also fit in with my training runs.

Things to watch out for.. (and rightly avoid as much as you can..)

“Now you wouldn’t believe me if I told you, but I could run like the wind blows. From that day on, if I was ever going somewhere, I was running!” – FORREST GUMP

Error: Twitter did not respond. Please wait a few minutes and refresh this page.

Shout out to my group who, over this weekend & last excelled in their races. It’s been a real privilege & a joy to see everyone work together and hit their goals. Even when things don’t go to plan the team work & enthusiasm to help each other is what makes it special. @wellingtonscottish @runwellington @jameskueglercoaching #dothework #teamwork #teamgoals #coachinglife
Mountains, Rivers Forests & Sunshine = Adventures 🏔 🌳 ☀️ #adventures #timetoplay #whatrunnersdo #trails
This crew 😍 Getting through a key session before a few events coming up. Everyone is excited & in good form. #runwellington #jameskueglercoaching #wellingtonscottish #olympicharriers
The Wild Coast - incredible landscapes on the rugged coast from Ocean Beach to Eastbourne #trekcheckpoint #gravelride #granfondo #nzcycletrail #wildcoast #featherstontowellington