So why am I quoting a U2 song on a race recap? Well let me tell you that Xterra Race 1 was absolutely amazing! Yes regardless of the rain, the mud and the hard graft climbs it was beautiful!

This was my first Xterra Trail Race of the series. The series consists of four trail races with options of a short, medium and long course options. This is great since anyone can have a go by choosing a distance that they are comfortable in. I signed up for the Long course over the series. The first race was in quite familiar territory for me in the Makara Peak mountain bike park. A haven for mountain bikers and the occasional runners who are brave enough to venture into run the trails now and then. Essentially the total length of all tracks combined is about 50kms give or take a few! The park is only about 20mins drive from central Wellington where I live and I have ridden my Mountain Bike on some of these tracks so I was somewhat prepared for what I was in for.

Another side note that I should add before I continue on this recap is that I’d just gotten back from a week in London. I’d been inside a plane for about 20-30hrs and Saturday was mostly spent recovering! Essentially a week of what was mostly running on the flat roads of London. The last “hill” run that I had run was the Porirua Grand Traverse. In any case I wasn’t out there to “race” but run on some awesome trails with a whole bunch of others and enjoy it!

Sunday 21st April morning started pretty much with a downpour and driving to the start I knew this run was going to be pretty much a wet and muddy affair. However it wasn’t that cold since there was hardly any wind which was a bonus some might say in Wellington.

There was a long queue at registration since essentially the first race was a sell out with over 500 people taking part in across all of different event options! After picking up my registration number and timing chip and getting my gear all sorted I headed to the start of the race and met up with some of the others from the Wellington Running Meetup Group. Most were doing the short and medium course.

The Long Course runners (which included me) was waved off after a race briefing around 9:15am from up the road from the ‘official’ start gate. This was to allow everyone to get into multiple groups for the first part which was a gradual uphill on some single track where passing wasn’t that easy. I was kind of in the ‘middle’ group averaging about 6min/7min km pace for the first part of the run. The first part is on two well maintained trails (which was soggy not muddy) named Koru and up Sally Alley. Then heading down via Missing Link to Nikau Valley with a climb up via Possum Track and then all the way up Leaping Lizard and onto Aratihi to Makara Peak (highest point at around 410m).  Then it’s a downhill via Vertigo! Yup Vertigo! as the name suggest was pretty vertically downhill, it was pretty technical and classed as an “Expert” downhill track in MTB terms! And going down that on a rainy and muddy day was pretty much interesting to say the least! It was part mud skidding and sliding all the way down! And just when you thought things can’t be that bad after this, you headed UP in to Trickle Falls aka “Tricky Falls” – I have no idea how any one would ever use this as a downhill or an uphill mountain bike trail. Trickle falls is steep, rocky and goes over 1km back up to Makara Peak, pretty much I was walking and clambering up the steep rocky slopes at this stage. Some others in front of me was having difficulty and was sliding backwards for each couple of steps! It was slow going but eventually made it back up to Makara Peak with about 15kms into the race! After that climb it’s a pretty good run along Ridgeline and then onto Big Tom’s wheelie and onto Lazy Fern where it was a smooth & fast run back to the Finish! Total time without any major mishaps apart from falling back on my arse a couple of times on mud 2hrs 23! Out of the Men’s open field smack bang in the middle again! 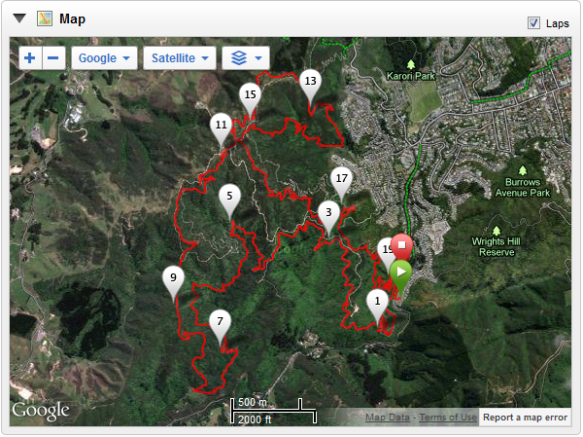 I had fun! I was completely covered in Mud! I was wet, cold but I didn’t care! I was smiling and wanted more! It was just what I needed on a Sunday! After the race I chatted with a few people and grabbed a coffee from the cart and headed back to my car. 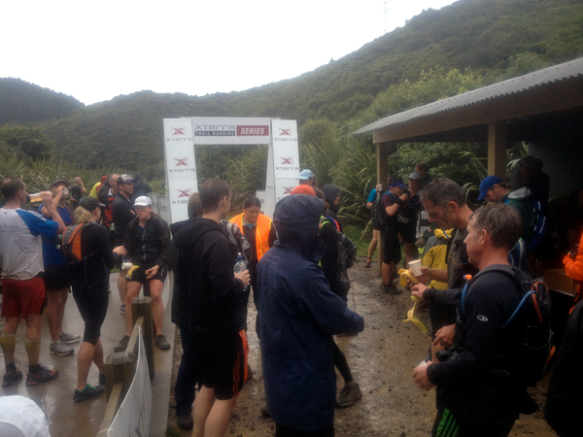 I’m already looking forward to the Second Xterra Race on the 12th of May! Until then I have the Rotorua Half Marathon next weekend on Saturday 4th May! I’ll update how I went in that next week!