Last September (2014) I left to Europe for a change of scenery. My first stop was Germany for the Berlin marathon which I had been preparing for over the New Zealand winter. Which was also the last time I actually posted something here on the blog. A lot has happened since then (obviously) and this is an attempt at re-kindling this blog into action again.

After Berlin I headed to Galicia, Spain – Galicia is in northern Spain. When you think of Spain you’d immediately think of warm weather with beaches and sun all year around, you would not think of grey skies, almost constant drizzle and lush green farmlands. Welcome to Galicia. I arrived in La Coruña (or A Coruña) the capital of Galicia which in terms of size is kind of like Wellington but with a larger population. Pablo Picasso grew up in La Coruña but left when he was around 11 years of age. There is also rumor that Fidel Castro has relatives who were originally from Galicia. If you are into eating meat then I highly recommend “Everything but the Squeal” by John Barlow. Read it you’ll either love it or hate it, just like living in Galicia. Anyway it took only a little time to get adjusted to my new running surroundings, with some easy runs around Torre de Hercules and the waterfront to the millennium tower and back. Bit of wind and a bit of rain now and then felt, like I never left Wellington. 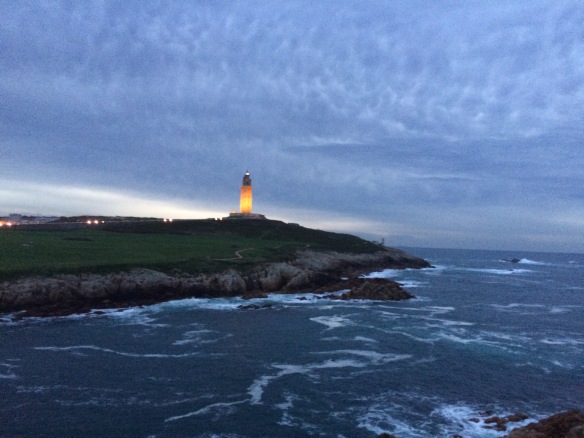 Torre de Hercules – great running trails around and around this historic light house – if you don’t get blown off to the sea that is..

In the weekend there was a major 10km race being held in the city of La Coruña (Sunday, October 5, 2014). This was a popular race (Coruña10) with well over 5000 runners taking part in the race. I signed up for this race and was able to run a 10k PB of 39:18. That’s about a minute and a half faster than my previous time. Slow compared to most standards but for part time runners like me that’s a good self confidence boost, especially straight after running a marathon.

Coruña10 – a 10km PB of 39:18 – being chased by Galicians amid cheers of Venga CHICOS!! Wellington Scottish Reprezent! –

Next up we went to participate in a long standing race in the historic city of Santiago de Compostela. This was a 12km road race running through the city and ending in front of the world famous St James cathedral. The course was a little bit hilly but it was a great race with loads of people cheering everyone on. “Venga chicos!” is the way to cheer runners if you are ever in Spain watching a race. I must say that in Spain for about 10-20 Euros as part of race registration you end up getting value for money including a pretty good quality training shirt, food and drinks at the end of the race. The best thing is your results are immediately available after the race via Champion chip by scanning your QR code printed on your number using your smart phone. My adventures continued despite this being my second winter in a row, a few weeks later we ended up in Porto in Portugal. Just a 3hrs drive across the border and we were there to cheer our friends on at the Porto marathon. This time we signed up for the “Family race” which was a 16km race run on the same marathon course but of course finishing after 16kms. This was a great event and we had a good time. Oh apart from the bit where we got absolutely drenched in rain at the finish supporting our friends who were running the marathon. Since being here in Europe I have somewhat reduced my core mileage due to various reasons. I still get in about 60-70kms a week. Next up is Vienna City Marathon in Austria on the 12th of April, I am planning to keep updating the blog with more posts soon including past adventures in Portugal and orienteering. Here are some photos from my time in Galicia.

Orienteering – somewhere in the Galician hills – don’t ask where I was lost – the map is just for show.